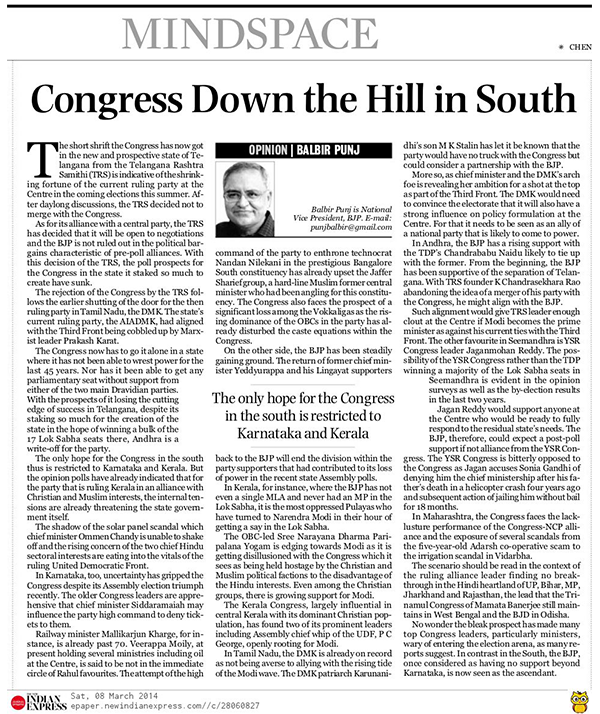 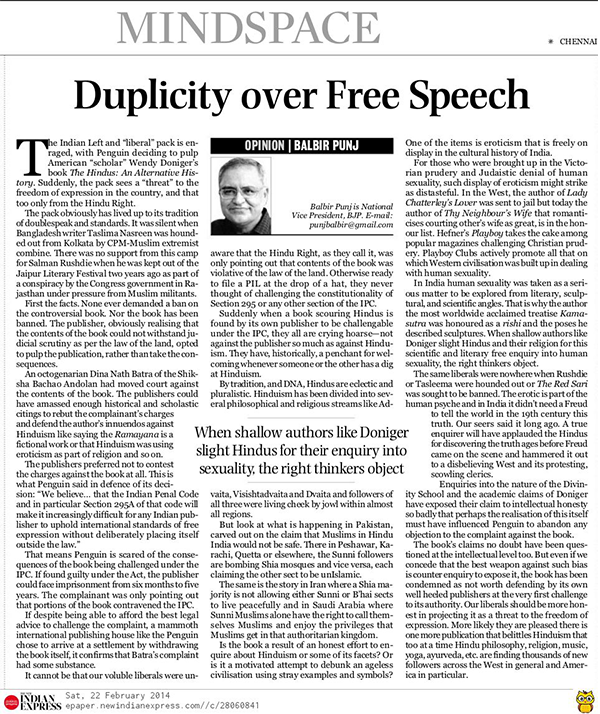 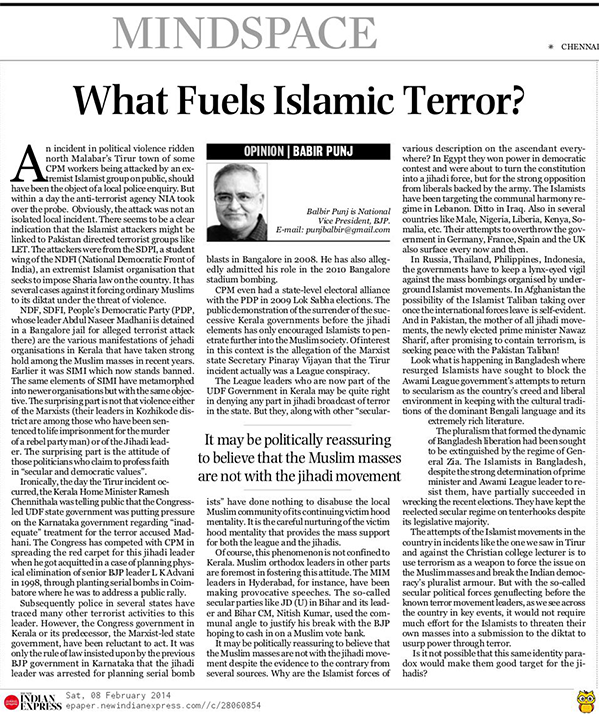 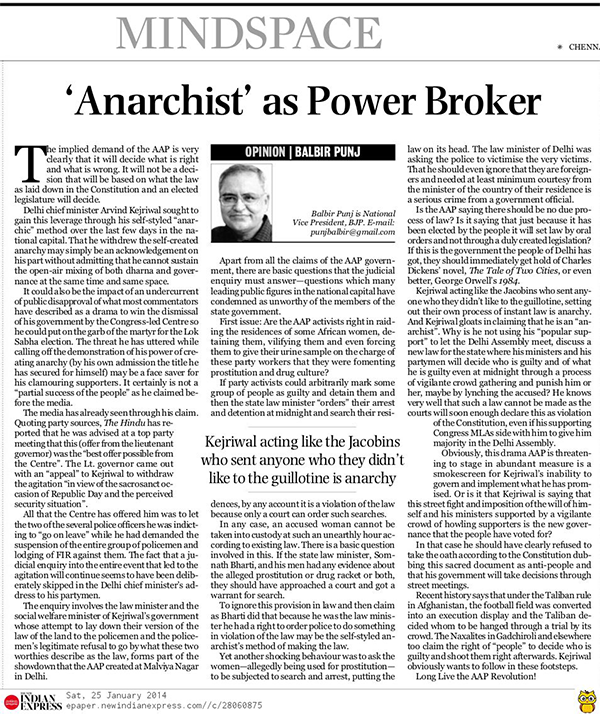 By Mr. Balbir Punj
It is bad enough for the Congress that it suffered a humiliating defeat in the recent elections to the four state assemblies. But worse is still to follow. Realising that the dynastical charisma of the mother-son duo was losing its electoral sheen, the Congress men and the allies are up in arms against the high command at least in the three major states—Andhra Pradesh, Maharashtra and Kerala—where the aging party is still in power. The beleaguered Congressmen have reacted to the crushing debacle in two ways. Some are just too stunned to say anything and are quietly looking for other options to secure their uncertain political future. For most of them ideology and commitment to the party programmes are a matter of connivance. And there are others who have decided to take the bull by the horns, challenge the high command and stage an open revolt.
Read More
New Indian Express 2013-11-23

By Mr. Balbir Punj
What is the litmus test of secularism in India? Do we only go by the condition of minorities in the Hindu-dominated states such as Gujarat, Tamil Nadu or Maharashtra? Should we also not see how the Hindus are treated in states where they are in the minority such as Jammu and Kashmir, Nagaland and Mizoram and the way our “secular” establishment genuflects before the majority there. Our small but strategically placed tribal state of Mizoram, straddling the Myanmar border, also occupies one of the top spots in literacy with a near 100 per cent literacy rate and school enrolment. So when that state is going for assembly polls this electoral season, you should expect aggressive public discourse on subjects as wide-ranging as jobs, development, aspirations of the young and their addictions, etc.
Read More
New Indian Express 2013-11-16

The blackmail before partition

By Mr. Balbir Punj
Samajwadi Party leader Mulayam Singh is the latest politician to absolve the Muslims from the responsibility of having forced a bloody partition of the country in 1947. Of course Mulayam’s assertion is a part of party propaganda in an election season. And propaganda cannot be a substitute for history. A recall is in order to understand the context in which partition of India became inevitable. After the demise of Aurangzeb in 1707, the Mughal empire started disintegrating. The power vacuum in Delhi was filled by valiant Marathas and the Mughal emperor became their pensioner. Sikhs in Punjab, Marathas in Central India, Jats and Rajputs in the west emerged as new power centres. In 1803, the Marathas lost Delhi’s control to the East India Company after a fierce battle at Noida (then Patparganj) near Delhi and the Mughal emperor then onwards became a pensioner of the British. Muslims naturally resented their newly defined subservient status and a section of them decided to join hands with the Hindus, who too hated the British rule. The result was the first war of independence of 1857.
Read More
New Indian Express 2013-10-19

By Mr. Balbir Punj
By some strange coincidence Union finance minister P Chidambaram’s description of the coming general elections as an ideological battle between “secular” parties and the RSS, and the statement of general secretary of the Jamiat-Ulema-e-Hind Maulana Madani warning the secular parties, especially the Congress, not to hold up Narendra Modi as a bugbear to win Muslim votes, have come very close to each other. Madani is not saying, he explained in a discussion with NDTV, that Muslims would vote for the BJP, but that they are no longer taken in by the Congress projection of Modi as a threat to their interests. The Congress, he said, instead should come out with what the party has done for the community in 60 years, accusing it of only exploiting the bugbear of BJP and not doing anything in effect for the Muslims. This would no longer work, he asserted.
Read More
New Indian Express 2013-10-05

By Mr. Balbir Punj
Union home minister Sushil Kumar Shinde’s letter to chief ministers to ensure that in the fight against terrorists, care is taken to prevent harassment of innocent Muslims and the “innocent” should be released at once is yet another instance of the ruling Congress’ divisive agenda even in an areas of national security. As expected none of the “secular” parties or academics have protested against the grossly communal missive. Had the home minister expressed concern over innocents being harassed irrespective of their religious or any other identity that would have been understood as a legitimate expression of the government’s concern at wrong being done to any citizen in the authorities’ enthusiasm to secure India against terror from any source.
Read More